A Year-Round Rainbow: Why Pride Shouldn't End in June

In celebration of Pride Month, we sat down to discuss how individuals and corporations alike can better support the LGBTQ+ community during Pride Month and beyond

Throughout June, thousands of individuals across the globe gather to honor Pride Month in the form of festivals, parties, and parades. These global celebrations applaud the monumental strides that have been made to better ensure safety and equality for members of the LGBTQ+ community. However, amidst the slew of parties and rainbow-clad attire, it’s easy to forget where Pride Month came from and how we got to where we are.

So, what’s wrong with all the rainbow-ness? In short, nothing. But ask yourself, are the rainbow logos enough to incite change for the LGBTQ+ community? How do they commemorate the Stonewall riots? How do they honor those who risked their lives fighting for equality? As a result, many corporations have begun to do more. They’ve pledged to make annual contributions to LGBTQ+ nonprofits or donate net sales from their Pride collections to various LGBTQ+ organizations. While this is a start, we’ve got a lot more work to do.

In short, Pride began in New York City in June 1969 when NYPD raided a known gay bar—The Stonewall Inn. This prompted LGBTQ+ patrons and residents to retaliate in the form of riots and confront the blatant homophobia demonstrated by the police. A year later, to expand on the growing resistance, protestors marched to Central Park in what was known as the first “gay pride.” Pride Month commemorates those who rebelled against the unjust systems of oppression and continues the fight towards acceptance, equality, and safety for LGBTQ+ individuals.

What was once a political act of resistance, has now become a heavily commodified affair. Throughout June, rainbows appear everywhere—from reimagined company logos to entire “Pride collections” at clothing retailers—corporations are largely eager to participate in the Pride Month festivities.

Throughout June, LGBTQ+ allyship seems to skyrocket, but come July 1st, the rainbow collections are retired and the donations come to a halt. For the queer community, however, their fight for equality, justice, and visibility doesn’t end and neither should allyship. As a result, we asked ourselves; How can corporations do more? How can we expand our support for the LGBTQ+ community after Pride Month? Beyond that, how can we support our own queer communities?

To answer these questions and discuss the nuances of Pride today, we sat down with CyberGrants’ very own, Reya Jasmin. Through her own past experiences with discrimination in the workplace, Reya has made it her mission to create a safe space for LGBTQ+ individuals at CyberGrants and beyond.

CyberGrants in Conversation with Reya Jasmin:

To kick things off, Reya would you mind introducing yourself and your role at CyberGrants?

My name is Reya Jasmin and I am a software developer at CyberGrants and I’ve been here for almost two years now. I am a non-binary trans woman and I use she/her or they/them pronouns interchangeably. I am also a lesbian and polyamorous.

Coming out in the workplace can be especially challenging, how have you navigated that process and how has CyberGrants been supportive?

I actually fully came out at my previous job. I had a whole plan with my Human Resources team and my managers were all aware. However, that company was a little more of a ‘boys club’ and I definitely started to feel like I didn’t quite belong there anymore. When I was searching for a new job, something I really liked about CyberGrants was our mission statement, ‘Make Incredible Happen,’ and the goal of helping people around the globe. The individuals within the company really embrace our mission and I have never felt anything but welcome and have always been treated normally. There’s also a willingness to grow, which I think is reflected in upper management. As the CEO, Mark Layden really embraces CyberGrants and who we are and I think that is a very unique and special thing about this company.

What does Pride mean to you?

Pride is a very complicated thing for me. It’s a big celebration that I get to share with my chosen family, my actual blood relatives, and thousands of other people I don’t have any relation to, but we all share this connection. It’s also a memorial to the Stonewall riots, which were among the first Pride demonstrations throughout the US. While we have significantly more rights as queer folk today than we did in 1969, there is still a lot of work to be done both legislatively, and in the hearts and minds of people. For me, I try to keep that in mind by celebrating our progress, but also keeping it as a memorial for the folks who died fighting for our rights and were forgotten by our government—like during the AIDS epidemic. So it is both a very happy occasion and a very sad occasion.

How do you support the LGBTQ+ community within your role at CyberGrants?

I try to take a very active social role within CyberGrants. I am—to the best of my knowledge—the first openly trans person within the company and have tried to use my visibility as a trans person to help educate people whose hearts may be in the right place, but who are not sure how to interact with the trans community. For example, I’ve had people ask, “What’s your old name?” and I say to them, “I’m not going to tell you, and it’s not because I don’t trust you, and it’s not because I don’t like you, but it’s just not something you ask someone.”

I also started a private Slack channel for the queer community at CyberGrants. The first and only rule of the channel is that we don’t discuss who is in it. Everything we talk about is completely private and—to the best of everyone’s knowledge—I am the only person in the channel. So I’ve really just tried to make myself a resource for others.

What are some LGBTQ+ causes, nonprofits, or organizations that you personally support or recommend supporting?

The cause that I support the most is the Trans Lifeline, which is a nonprofit organization that has a number you can call if you are trans or questioning and feeling suicidal. It is a feeling that I am very familiar with and a feeling that many people I know and love have dealt with. Many of them have called the lifeline and are here today because of it—it’s a very important cause to me.

Another great organization is the Center for Black Equity, which specifically focuses on Black queer individuals. They’re a segment of the community that doesn’t get a lot of attention because Pride is gentrified in a lot of ways. So thinking about how Pride was started by Black trans people, it is extremely important that those groups of people get the rights that they deserve.

There’s another nonprofit called the Privilege Escalation Foundation, which is aimed at getting trans people in tech better healthcare.

When supporting nonprofits, my rule of thumb is that I always try to support organizations that are small and local because you get more for your dollar in terms of your ability to help people. If you have a local chapter of an organization or an organization that focuses on just your city, those are the ones that I tend to donate my time and money to. It’s also important to take a look at the leadership. If it’s a trans organization, is it run by trans people? If it’s primarily focused on Black queer people, is it run by Black queer people? There is so much diversity under the queer umbrella, so you want to ensure the leaders of these organizations also share that diversity.

What are some ways we can continue to celebrate Pride after Pride Month ends?

I think there are two really important ways to do this:

How do you think corporations can better support the LGBTQ+ community during Pride Month and beyond?

The obvious answer is not just using the rainbow as a profit-making mechanism. Another way to support the LGBTQ+ community is to make sure that insurance covers queer and trans-related healthcare. Additionally, HR sometimes has [written rules regarding] “appropriate attire” which is typically gendered. This can really hurt gender non-conforming people, trans people, and it can also hurt people of color. As a corporation, you can also support small, queer creators. If you’re holding a Pride celebration, for example, and you’re buying your employees t-shirts, find someone who will print them who is a queer creator and commission them to come up with a design.

In reflecting on our discussion, it’s apparent that while making annual donations to LGBTQ+ organizations is a start, it’s simply the tip of the iceberg. As Pride Month comes to a close, here are additional ways to continue your allyship year-round:

Ready to celebrate Pride all year? Let us know what you’ve got planned here. 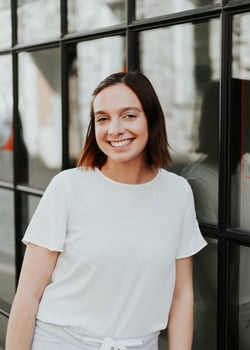